After a trip last week to the West Coast, the Green Bay Packers go to the other side of the country to play the New York Giants.

Overall, the Packers are 28-23-2 against the Giants in the regular season.
Including the postseason, Green Bay has won two straight over the Giants.
This will be the 11th time the Packers and Giants have played each other in the month of December, and the first since 2011, when Green Bay won at New York, 38-35.
In each of the last four contests (including postseason) between the two teams, the winning team has scored 23-plus points while the losing team was held to 16 or fewer points.
It is the second straight year Green Bay will play at MetLife Stadium, having defeated the New York Jets in overtime last season in December in Week 16 (44-38).
It is the first time since 2013 that the Packers will face the Giants at MetLife Stadium.
This marks the second straight year the Packers have played on the road in the first two games after the bye week.
It will be the fourth game Green Bay has played at noon CT this season, having won the previous three contests.
The Packers return home next week to take on the Washington Redskins, marking the first time Washington has played at Lambeau in December.

FOX Sports, now in its 26th season as an NFL network television partner, will broadcast the game.
Play-by-play man Thom Brennaman joins analyst Chris Spielman and sideline reporter Shannon Spake.
Milwaukee’s WTMJ (620 AM), airing Green Bay games since November 1929, heads up the Packers Radio Network that is made up of 50 stations in four states. Wayne Larrivee (play-by-play), two-time Packers Pro Bowler Larry McCarren (analyst) and three-time Packers Pro Bowler and two-time All-Pro John Kuhn (sideline) will call the action. McCarren first joined the team’s broadcasts in 1995 and enters his 25th season calling Packers games. After originally being paired together in 1999, McCarren and Larrivee enter their 21st season of broadcasts together. They surpassed Jim Irwin and Max McGee for the most regular-season and postseason games broadcast for the Packers with 313 at the 2018 season opener against Chicago.
The broadcast is also available on Sirius Satellite Radio (WTMJ feed).
Sports USA Radio will air the game on radio across the country with John Ahlers (play-by-play) and Brandon Noble (analyst) calling the action.
DIRECTV subscribers can watch the game on Channel 712.


THE DOPE ON THIS WEEK’S OPPONENT:

In his 11th season in the NFL, having served as an offensive coordinator for two seasons (Los Angeles Rams, 2017; Tennessee Titans, 2018), a quarterbacks coach for six seasons (Washington Redskins, 2010-13; Atlanta Falcons, 2015-16), and an offensive assistant for two seasons (Houston Texans, 2008-09).
Guided the Titans’ offense in 2018 to a No. 7 league ranking in rushing (126.4 ypg) as Tennessee registered 11 games with 100-plus rushing yards, tied for No. 2 in the NFL.
Helped the Rams lead the league in scoring with an average of 29.9 points per game in 2017, more than doubling their average from 2016 (14.0 ppg).
Tutored QB Matt Ryan, who led the league in passer rating (117.1) in 2016 on his way to being named NFL Most Valuable Player by The Associated Press.
Coached rookie QB Robert Griffin III with the Redskins in 2012, who became the first QB in team history to win AP Offensive Rookie of the Year.
PAT SHURMUR…In his second season as the Giants’ 18th head coach.

His first season as the Giants’ head coach was highlighted by RB Saquon Barkley, who took home Offensive Rookie of the Year honors after leading the NFL with 2,028 yards from scrimmage and 11 touchdowns.
Spent the 2016 and 2017 seasons as Minnesota’s offensive coordinator, where the Vikings won the NFC North title and advanced to the NFC Championship game in 2017 behind an offense that ranked in the top 10 in scoring (23.9 ppg) and rushing (122.3 ypg).
Was named the head coach for Cleveland in 2011 and tutored QB Colt McCoy to a career high in passing yards (2,733) and passing touchdowns (14).
Served as an assistant in the NFL for 17 seasons, including two stints with Philadelphia (1999-08; 2013-15), St. Louis (2009-10) and Minnesota (2016-17).
THE PACKERS-GIANTS SERIES

The winner of each playoff matchup between the Packers and Giants has won the NFL Championship or Super Bowl.
After New York won the first matchup 6-0 in 1928, the Packers followed up by winning six of the next seven contests.
Green Bay’s five-game winning streak from 1961-69 included two NFL Championship games and is the longest streak of the series.
New York and Green Bay met in the NFL Championship five times (1938, ’39, ’44, ’61 and ’62) with Green Bay winning each except 1938.
The Packers and Giants met in the postseason during the Super Bowl era in the NFC Championship during the 2007 postseason and the NFC Divisional round during the 2011 playoffs.
NOTABLE CONNECTIONS

Wish there was such a thing as a colon-cleanse for a football team so they can get all the crap out of themselves.

This should be a no stress win but it’s the NFL so who knows. This is a 8-3 team if you look at the standings but it’s closer to 6-5 talent wise. Don’t trust the defense and offense has been inconsistent. Special teams will be a factor Temps in the 40’s but rain might make this closer than it should be

I am done predicting for the rest of the season. I just do not know what this team is going to do week to week. 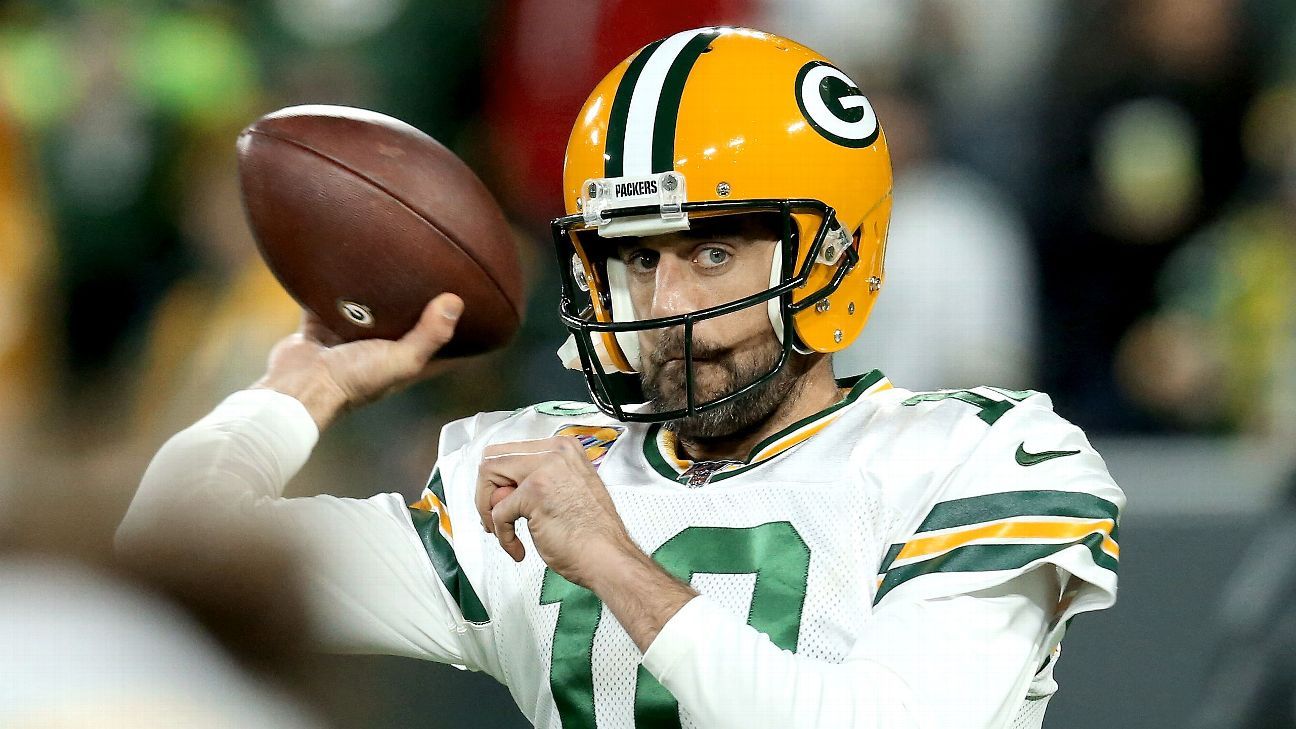 Aaron Rodgers: I have to 'take the lead and get hot' for Packers to make run

Rodgers offers what he believes is a sure-fire way to rebound from Sunday’s disastrous performance in the blowout loss at the 49ers and finish strong.

But, actions speak louder than words. I think Rodgers needs to be brought down several more pegs before he changes. I doubt Sunday favors us.

1: Don't get down over the Niners game. Officials clamp down on 3-4 teams every week. This time they clamped down on our offense, especially early. Don't let it mess with our heads.

3: Defense needs to be able to cover the middle of the field, especially TEs. Since we're giving up 61 yard TDs to Kelce and Kittle anyway, why not see what Burks has got? Or Josh Jackson?

4: If the defense is gonna blow assignments anyway, why not go man on man instead of zone? Be aggressive, bring some extra heat.

Nerd said:
1: Don't get down over the Niners game. Officials clamp down on 3-4 teams every week. This time they clamped down on our offense, especially early. Don't let it mess with our heads.

3: Defense needs to be able to cover the middle of the field, especially TEs. Since we're giving up 61 yard TDs to Kelce and Kittle anyway, why not see what Burks has got? Or Josh Jackson?

4: If the defense is gonna blow assignments anyway, why not go man on man instead of zone? Be aggressive, bring some extra heat.
Click to expand...

The officials played zero role in the outcome. No

Unless the Giants come up with a running game that nets 150+ yards, the Packers should win this one. Jones is not yet in a position where he can be a game changer at QB. But, he is improving, if you listen to some people. I'm not certain I agree. I think he's treading water, and will, until this season is over.

That said, this is a healing game for the Packers. I have the Packers by 7. They just don't know how to put teams away.

Going from coast to coast. Anything can happen...

Packinatl said:
The officials played zero role in the outcome. No
Click to expand...

They clamped us down. I mean, that call on Afams? Please. The Jimmy Graham pass, Was Rodgers down when that fumble came out?

Look how well we moved the ball in the third quarter. That's a normal Packers offense.